“Senator,” she said, letting out an audible sigh.

In that singular moment, Supreme Court nominee Ketanji Brown Jackson spoke for countless Black women who have had to gather all the patience, strength and grace within to answer insinuating questions about their credentials, qualifications and character.

It was Day One of questioning at the Senate Judiciary Committee as the Harvard-educated Brown Jackson, the first Black woman to be nominated for the nation’s highest court, was making history.

The federal judge had to endure hours of public scrutiny from skeptics, namely the Republican senators who are erecting a wall of opposition to her landmark nomination, the first in the court’s 233-year history, and may vote en bloc against her confirmation.

“It was really traumatizing to watch,” said Melanie L. Campbell, president and CEO of the National Coalition on Black Civic Participation and convener of the Black Women’s Roundtable. 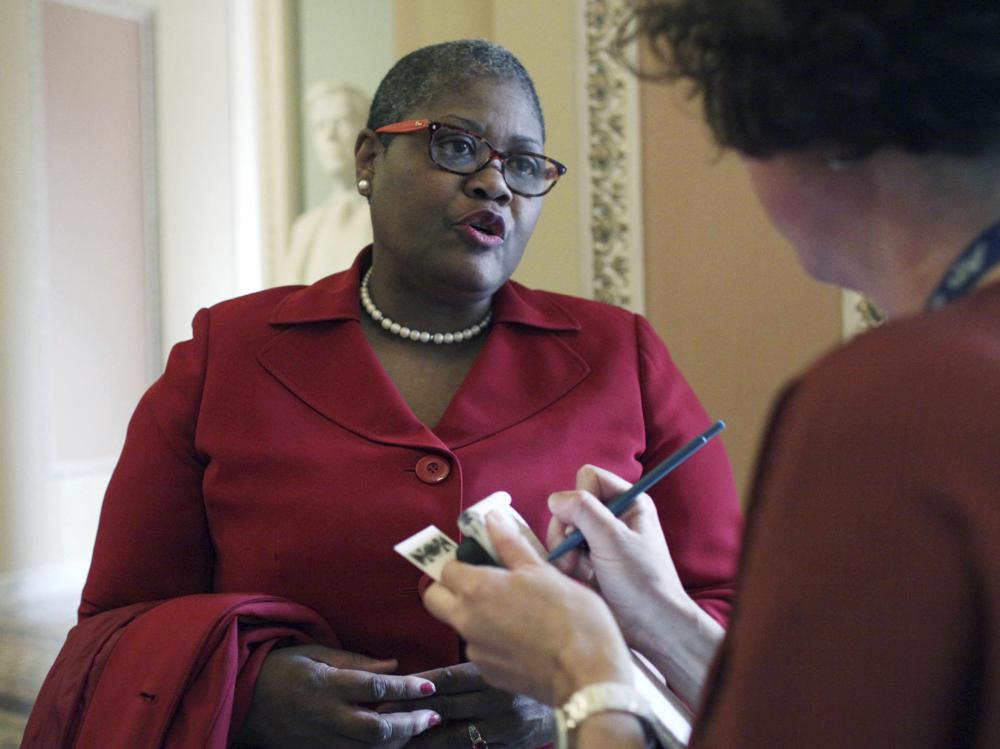 From questioning of Brown Jackson’s view of books on critical race theory that drew her exasperated sigh — “They don’t come up in my work as a judge,” she said — to the loaded suggestion that the sentences she imposed on child pornography defendants were too lenient, the questions from the Republicans tapped into long-standing American grievances over race, class and public safety.

The insinuations that Brown Jackson, a distinguished jurist and mother of two, is a secret radical liberal or poses a danger to the safety of children felt to some supporters as yet another example of highly qualified Black women having to endure indignities and distortions of their credentials, even as they shatter racial barriers in American society.

Campbell told The Associated Press that “the othering of her, in a sense, like she’s against our children,” seemed like a tired political tactic.

“My spirit feels it was to bring this Black woman down because she’s about to break the glass ceiling that, once broken, opens the door to more.”

Democrats praise President Joe Biden’s choice of Brown Jackson as long overdue, a chance to start making the court more reflective of the diverse nation it serves. But they have been slow to bolster the judge’s nomination against the unrelenting attacks and instead allowed them to linger.

Over and over during her hearings, Republican Sens. Ted Cruz of Texas, Lindsey Graham of South Carolina and Josh Hawley of Missouri hammered Brown Jackson on a handful of the many cases she handled as a judge, asking if she regretted having a record that, in their view, is soft on child pornography defendants.

No matter how many times Brown Jackson asserted, for example, that the child pornography cases were some of “the most difficult” of her career or tried to explain the particulars of the law, the GOP senators talked over her, past her and pushed onward in their attempt to portray the nominee as they wished.

“I can only wonder what’s your hidden agenda,” asked Sen. Marsha Blackburn, R-Tenn., pointing to one of the judge’s earlier writings. “Is it to let violent criminals, cop killers and child predators back to the streets? … Is it your personal hidden agenda to incorporate critical race theory into our legal system?”

These senators insisted their questions were not about race. In fact, Graham opened with a warning that the questioners would be framed as racist. “We’re all racists if we ask hard questions. It’s not going to fly with us.”

Yet Republicans ignored analysis that shows Brown Jackson’s sentencing record on such cases is on track with other judges appointed by both Democrats and Republican presidents, and that in some cases she went beyond recommendations to come down harder on defendants.

“What I regret,” Brown Jackson told the senators, “is that in the hearing about my qualifications to be a justice on the Supreme Court, we’ve spent a lot of time focusing on this small subset of my sentences.”

Judge Ketanji Brown Jackson speaks during the Senate Judiciary Committee confirmation hearing on her nomination to become an Associate Justice of the US Supreme Court, on Capitol Hill in Washington, DC, on March 23, 2022. (Photo by Jim WATSON / AFP) (Photo by JIM WATSON/AFP via Getty Images)

For many supporters of Brown Jackson, the Republicans’ cherry-picking of her record tarnished a momentous occasion. 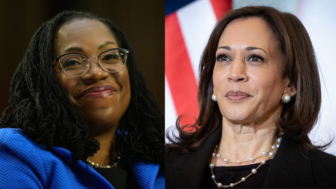 “She should not have had to endure what she endured,” Turner told the AP. “The Democratic senators should have used their authority and positioning to show the requisite outrage necessary for that moment.”

The American Bar Association’s standing committee on the federal judiciary said in its survey of some 250 judges, attorneys and academics that words such as “brilliant,” “beyond reproach,” “fair” were used to describe Brown Jackson, who earned the panel’s highest rating.

“They uniformly rejected any accusations of bias,” said Jean Veta of the ABA committee.

In a letter to the Senate committee, Fred Bowman, a University of Missouri law professor and former federal prosecutor, spoke of his dismay at the thought Brown Jackson was somehow “soft” on these crimes. His letter was signed by other experts in the field.

White House deputy press secretary Andrew Bates blasted the Republican line of questioning as an “embarrassing conspiracy theory” that “has been conclusively debunked by fact check after fact check.”

But alone before the panel, Brown Jackson had difficulty convincing the Republican senators as she worked to explain the rules judges adhere to and the nuances of the wrenching cases they face. The GOP senators rarely accepted the judge’s answers and interjected or just ignored her explanations altogether.

At one point, Brown Jackson simply stopped answering: “Senator,” she said to Cruz, “I’ve said what I’m going to say about these cases. No one case can stand in for a judge’s entire record.” 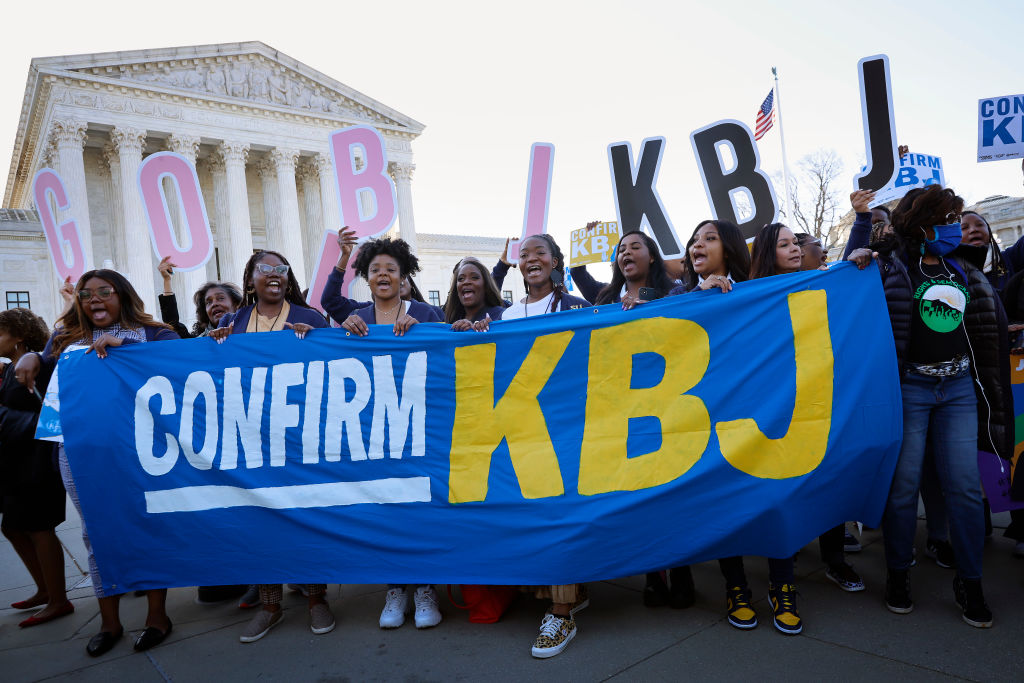 By Thursday, as the hearings concluded, Republican leaders in the Senate were using the issue — and her refusal to repeat earlier answers — as justification for opposing her confirmation.

Throughout the four days of testimony, Black women filled many of the seats in the committee room. Those women included some of the leading civil rights figures and members of the Congressional Black Caucus, which ran its own “war room” to back up Brown Jackson’s nomination.

LaTosha Brown, cofounder of the group Black Voters Matter, said she had received numerous text messages from Black women who were both outraged by Brown Jackson’s treatment from senators and heartened by her clear determination to endure the process.

“I just got texts that said, ‘Persevere.’”

It was a reference to Brown Jackson’s own words of advice delivered at the hearing to young people who may have watched what the nominee endured and felt discouraged.

“Black people in America,” Brown said, “if we don’t know anything else, we know what that word means.”