Cheney and Pence take the fight to Trump, from Georgia to Wyoming

The battle for the Republican Party is entering a new phase, and Rep. Liz Cheney sounded the first shot of it on Sunday evening.

“We face a threat we have never faced before: a former president attempting to unravel our constitutional republic. At this moment we must all summon the courage to stand against that,” Cheney, a Wyoming Republican and Donald Trump’s chief antagonist in the GOP, said in a speech Sunday night.

Cheney delivered the remarks at the John F. Kennedy Presidential Library after the institution presented her with a Profile in Courage award. She was one of five people given the award, along with Ukrainian President Volodymyr Zelensky and three other American officials from both parties who came under intense attack by Trump and his supporters after the 2020 election. 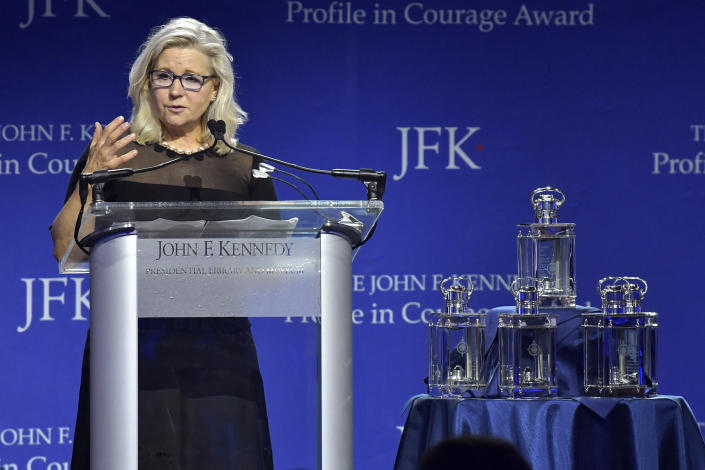 Cheney’s direct shot at Trump — referring to him as a current and ongoing “threat” to the republic’s survival — kicks off a week full of drama within the GOP.

Trump’s former vice president, Mike Pence, will rally with Georgia Gov. Brian Kemp on Monday evening, the night before Republican voters go to the polls in the Peach State. Trump made Kemp his No. 1 target for removal after the 2020 election, because Kemp, a conservative Republican, refused to go along with Trump’s efforts to overturn the results.

Kemp appears poised to defeat Trump’s handpicked candidate for governor, former U.S. Sen. David Perdue. Polling has consistently shown Kemp above 50%, ahead of Perdue by enough to avoid a runoff election and win the GOP nomination outright on Tuesday.

Pence’s appearance with Kemp is the former vice president’s boldest move yet in his ongoing divorce from Trump. Pence has walked a careful line for months, at once seeking to rebut Trump’s lies about the election while still celebrating their administration’s policy accomplishments. 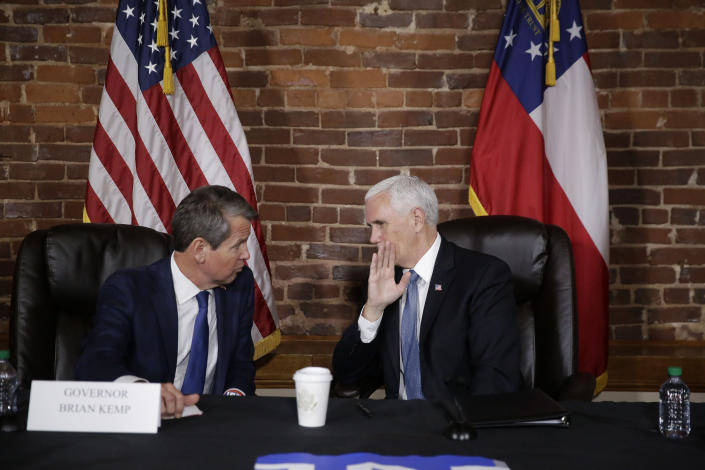 Gov. Brian Kemp and then-Vice President Mike Pence after a roundtable discussion with small business owners in May 2020. (Brynn Anderson/AP)

Close observers of Pence have noticed a pattern of steady and gradual escalation of his willingness to rebuke Trump. But the Georgia rally is the clearest sign so far that he is willing to do more than just poke at Trump ahead of the 2024 Republican primaries, which is increasingly likely to pit the two men against each other.

Having reportedly concluded that Georgia is a lost cause, Trump is launching a new offensive out west against Cheney. On Saturday, he will travel to Wyoming to campaign against her and for her primary opponent, Harriet Hageman.

Trump has had a mixed record this year in contested primaries where he has tried to oust Republicans he deems insufficiently loyal to him. But defeating Cheney, the most outspoken Trump critic inside the GOP, in Wyoming’s Aug. 16 primary is now a top priority for him. Conversely, Republicans who hope to move the Republican Party past Trump have coalesced around Cheney, fundraising for her as she attempts to stave off the former president’s assault. 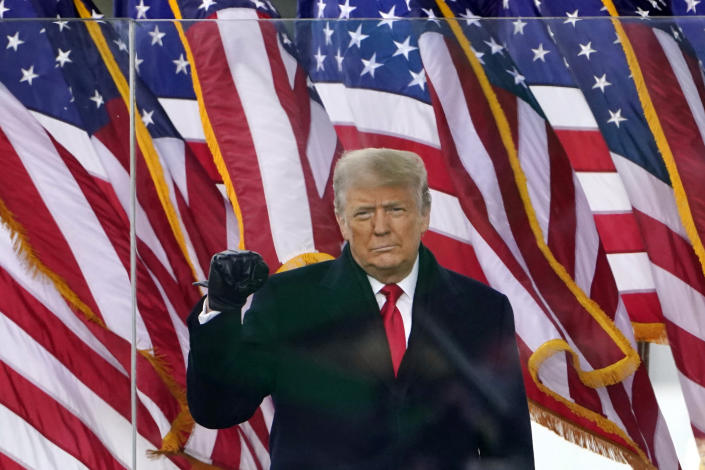 Then-President Donald Trump before speaking at a rally in Washington on Jan. 6, 2021. (Jacquelyn Martin/AP)

All of this will set up a series of public hearings held by the congressional committee investigating the assault on the U.S. Capitol on Jan. 6, 2021. The committee believes it can demonstrate to the public that Trump sought to overturn the election results through various means, in a way that has not yet been fully revealed, and that he intentionally did nothing during the insurrection, one source told Yahoo News.

Cheney is the vice chair of that committee and will play a leading role in those hearings, which will begin on June 9. Her speech at the Kennedy Library on Sunday served as a preview for how she will contextualize the events of Jan. 6.

Cheney is Republican royalty; she is the daughter of Dick Cheney, the former Wyoming congressman and secretary of defense who became George W. Bush’s vice president. But on Sunday she talked about her great-great-grandfather, Samuel Fletcher Cheney, who fought for the Union in the Civil War. She portrayed the current crisis of democracy in the context of America’s bloodiest conflict.

“I have found myself, especially since Jan. 6, thinking often of my great-great-grandfather and of the Union he fought to defend. And this was never more true than on the night of Jan. 6 itself,” she said.

Cheney then spoke in vivid detail about walking through the Capitol after pro-Trump rioters, who had sought to stop the certification of the 2020 election, had been expelled and defeated by law enforcement. 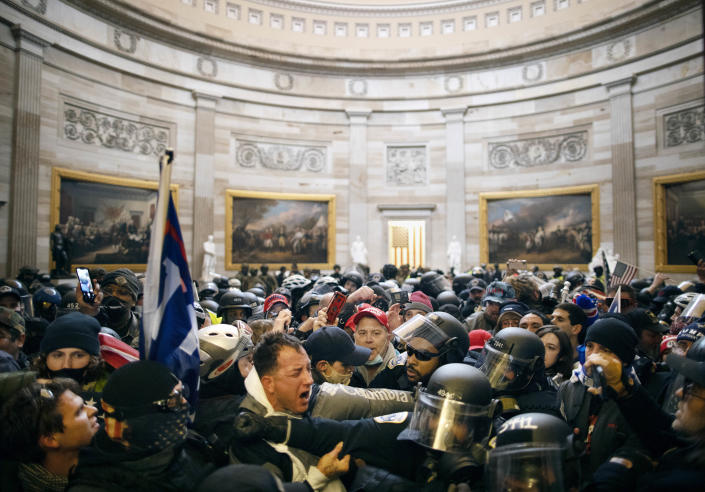 Cheney described the House chamber still strewn with broken glass and furniture piled against the walls in an effort to barricade against rioters. She narrated her walk through Statuary Hall, where Abraham Lincoln once served in Congress, and talked about seeing police in tactical gear resting against statues, surrounded by empty water bottles scattered across the floor, “exhausted from the brutal hand-to-hand combat in which they had been engaged for hours.”

And she talked about walking to the Capitol Rotunda, the majestic vaulted room at the center of the nation’s symbol of representative democracy, where late former presidents have lain in state. Cheney referred to the rotunda as “the most sacred space in our republic.” There too, police had battled Trump’s rioters.

Cheney spoke of looking at John Trumbull’s painting of George Washington resigning his commission as commander in chief of the Continental Army at the conclusion of the Revolutionary War in 1783. 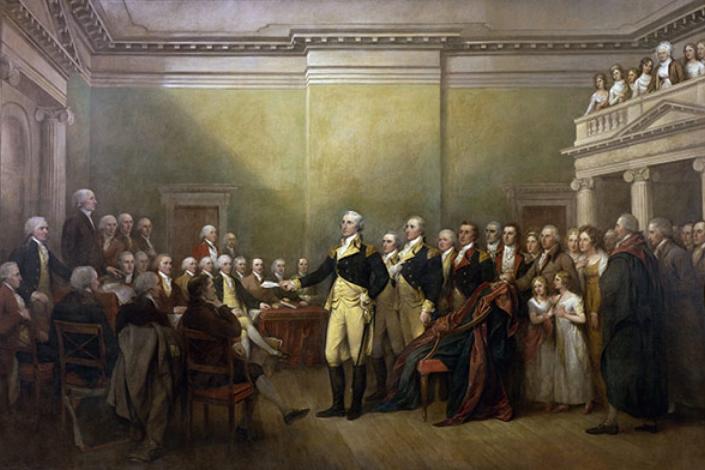 John Trumbull’s painting of George Washington that hangs in the Capital Rotunda. (aoc.gov)

“With this noble act, George Washington set the indispensable example of the peaceful transfer of power in our country. This is what President Reagan called ‘nothing short of a miracle.’ This is what President Kennedy called, in his inaugural address, ‘a celebration of freedom,’” Cheney said. “And this sacred obligation to defend the peaceful transfer of power has been honored by every American president, except one.”

Cheney quoted Kennedy from his inaugural speech in 1961: “In the long history of the world, only a few generations have been granted the role of defending freedom in its hour of maximum danger.”

Cheney concluded: “Today that role is ours. … The question for every one of us is, in this time of testing, will we do our duty? Will we defend our Constitution? Will we stand for truth? Will we put duty to our oath above partisan politics? Or will we look away from danger, ignore the threat, embrace the lies and enable the liar?”

It was as robust and forceful a speech against Trump, and Trumpism, as any politician has given, and foreshadowed the case Cheney will make against the former president in the weeks to come.

The rioters got within two doors of Vice President Mike Pence's office. See how in this 3D explainer from Yahoo Immersive.