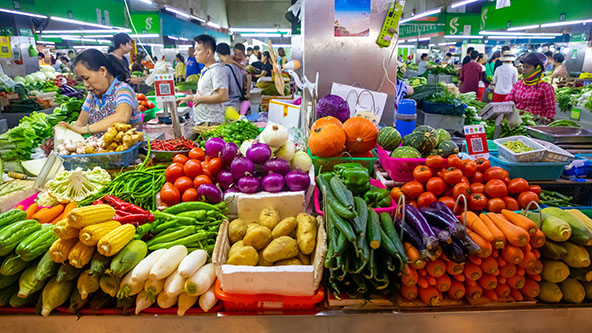 The global food system—a complex web of actors and interactions from production to consumption—is increasingly catching the attention of philanthropy and nonprofits, given its potential in moving the needle for climate change, planet health, and human health. Besides the fact that the current food system is responsible for a third of total greenhouse gas emissions, it sits at the nexus of agricultural and economic development, public health, rural livelihood, and social equalities, making the creation of a more sustainable food system both an urgent and a complicated challenge for actors across sectors and borders.

National governments, from the global north to the south, have made tremendous efforts—in collaboration with international or regional organizations, as well as the private sector—to put forth agendas toward a more sustainable food system. And policy is a powerful tool in the sense that it can reach the population at scale. But it often falls short of connecting an abstract concept to individuals’ daily lives and, in this case, inspiring individuals to change their food consumption. The truth is that the very idea of a “sustainable food system” remains alien to most customers in China and many other developing countries which only recently eliminated or are still fighting against widespread hunger. Even for those who are aware, the wording of “system transformation” connotes grand challenges that are more connected to long-term policy than the current concerns of individuals.

But such a transformation cannot be done without the change at the individual level. How to change people’s perception, understanding, and eventually choices of food consumption? How can civil society actors optimize their role to nudge such changes? Our case study of China demonstrates possible ways forward.

Food consumption is a behavior deeply shaped by the cultural and socio-economic conditions in which it is embedded. For instance, in Chinese culinary culture, animal-source food consumption is not only about gaining protein but also symbolizing power and status. Although this culture has recently started to change, particularly driven by a fast-growing middle class in urban areas who are seeking a healthier diet, to a large extent it persists. And China is not alone. Research in 2018 found that globally, the link between meat consumption and an individual’s perception of socio-economic status remains strong. Cultivating consumption behavior change is not a priority of either policymakers or market players, but it is what civil society actors are well-positioned to achieve through campaigns and educational programs. The problem is how.

China presents a context that is both unique and generalizable. First, civil society actors in China are not allowed the same freedom as their counterparts in the West, especially in terms of funding and organizing campaigns. Although we have seen increasing participation by NGOs and citizens in social construction, civil society actors and activities are still under scrutiny by the state. That means lessons we learn from China could be applied in situations where civil society actors are facing similar constraints on funding or autonomy.

Secondly, the complexity of the food system and the fragmentation of the field is analogical between China and other countries. The food system is gigantic because it sits at the nexus of many interrelated industries and social problems. Just to name a few, it is closely connected to rural and agricultural development, poverty and hunger, health and nutrition, climate change, animal welfare, biodiversity, and so on. As a result, actors in the field all have their own understanding of and priority for achieving food system transformation. Sometimes their values might even contradict each other. For instance, Community Supported Agriculture (CSA) groups and healthy vegetarian groups are both important players in the system, advocating for ecologically-farmed products, but they differ greatly on whether to consume meat products. Fragmentation also appears in understanding and responsibility because, in most governments, there is no “food system department” yet. Most likely there are agricultural departments, environmental departments, or economic departments, with distinct boundaries, making it difficult to forge a collective action with shared goals.

Sustainable food system transformation is still at its very nascent stage in China. Although Chinese customers are already familiar with green food, which are certified products as part of a national program to resolve the food safety concern, food system transformation is still a long way to go. It is much more than food labeling or choosing green or organic products. It requires conceptual and behavioral changes from the supply chain to the demand side. Therefore, we believe that the cases from China will be helpful for civil society actors in other countries that are just beginning or are about to begin the same transition.

Food is more than materials that sustain our bodies. It consists of multiple facets, and each facet can be used to connect different stakeholders through innovative storytelling. This is how the Good Food Fund, CBCGDF (a special fund under China Biodiversity Conservation and Green Development Foundation, GFF hereafter) partnered with the Nanjing city government to increase public awareness of the sustainable food system.

Established in 2017, GFF strives to promote the transformation of the food system in China through research, policy innovation, events, public education, and entrepreneurship incubation. GFF believes that promoting integrated food governance at the city level will make China's urban food systems more healthy, sustainable, and humane. In turn, those local shifts can lead to larger policy innovations and changes to the nation's food systems. 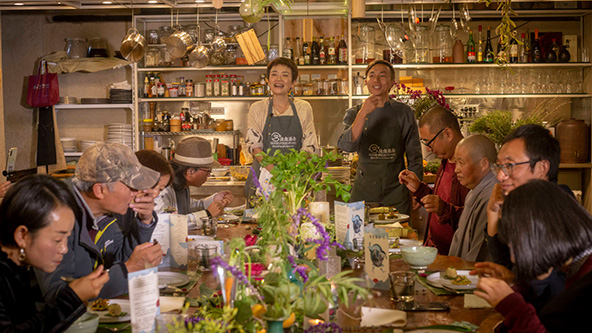 In 2021, GFF gained the opportunity to organize a session of the Nanjing Peace City Forum, which was originally a memorial event of the Sino-Japanese war. How could “food” relate to “peace”? GFF organized a roundtable under the theme of “peaceful symbiosis with nature” to discuss youth contributions to sustainable food production and consumption.

“Food has long been playing a vital role in maintaining a stable and peaceful society, and the counterexamples are easily found in famine, social turmoil, or war times,” said Jian Yi, Founder of GFF. “Food is so multi-dimensional that it denotes rich meanings. We didn’t add anything extra. We just broke down the meanings that share different facets of food to a different audience.”

GoalBlue, established in 2016, is a Chinese NGO that advocates low-carbon and responsible consumption to eventually reduce greenhouse gas emissions and protect the ocean. “Smart Eating” is one of GoalBlue's flagship programs that encourages consumers to shift to a low-carbon diet by consuming less red meat, more vegetables, and plant-based protein, as well as more fish from sustainable resources. Reducing meat consumption isn't easy for Chinese people because the culinary culture generally favors meat over vegetables. 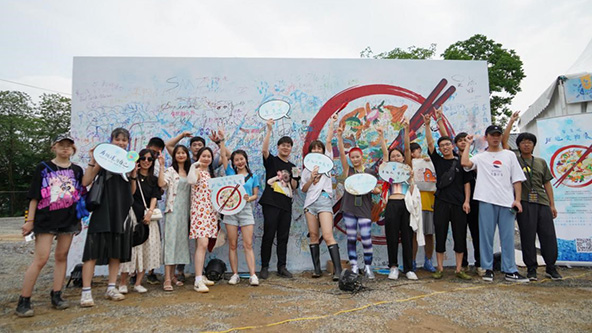 One of GoalBlue's strategies is to fashion the low-carbon diet as part of a new lifestyle through various urban activities. In 2020, GoalBlue partnered with Beijing Midi Music School and made the annual Midi Music Festival — one of the most influential music festivals in China — a place for change. It decorated the venue with “no meat still fun” banners (as opposed to “no meat no fun,” a common Chinese saying), released videos on low-carbon diets, set up booths for plant-based beverages and snacks, and volunteers handed out flyers and answered questions about food choices. Instead of directly disseminating the information through its website or social media outlets, GoalBlue creatively blended the campaign in a partnering event that is attended by a much greater variety of audiences. By doing so, not only has GoalBlue overcome the limitations usually encountered by Chinese NGOs; by positioning food in an unusual, artistic setting, GoalBlue reified food into a sustainable and fashionable lifestyle and connected food with consumers in a new way.

Innovative storytelling also comes from the supply chain. Enormous toil, low income, and relatively marginalized social status have made farming one of the least attractive occupations in modern China. “Jumping over the peasant gateway” is a Chinese saying that conveys a shared hope of millions of peasant families for their children to leave the village and change their fate. But food system transformation does not just grow out of the land. It needs people on the supply side to perform more sustainable, efficient, and climate-smart farming to provide healthy food for the growing population. The question is: how to change perceptions and make farming more appealing, especially to young talents? 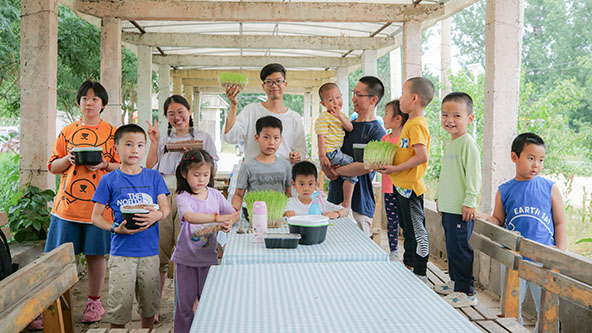 Shared Harvest is a social enterprise adopting the ecological farming and CSA model, founded by Shi Yan, who received a Ph.D. from the Renmin University of China. Besides providing sustainable agricultural products, Shared Harvest also strives to train “new farmers” on a path that, in Shi Yan's vision, should represent a promising career, a life in rural areas with dignity, and an industry constituted by more young people. The New Farmers Training Camp recruits trainees every year, especially college graduates who want to return to their homeland and make a difference. The program combines visiting ecological farms and cooperatives, learning new farming practices and various aspects of farm management (such as marketing and business modeling), roundtable discussions with experts, etc. As importantly, it presents a new image of farmers as people who not only make a living but who also contribute to a meaningful mission of reconnecting humans and the earth. To date, Shared Harvest has trained hundreds of new farmers, some of whom became partners with Shared Harvest once they established their own farms.

The Nanjing Peace City Forum, the Midi Music Festival, and the New Farmers Training Camp creatively reconstruct people's understanding of food. What they have in common are: breaking down the system, taking baby steps, and creating an innovation space to reconstruct the connections between food and different stakeholders. A system-level change like this always takes time and it always takes collective action.

In May 2022, China Chain Store and Franchise Association, the largest industry alliance of retailers in China representing more than 1,200 brands, launched a guidebook for retailers and e-commerce platforms to identify measures and effectively promote a healthier and greener diet among consumers. This would not have happened without growing consumer awareness and demand for more sustainable food production. This kind of advocacy by industrial associations is a positive sign for a more radical change moving forward, however gradual it might be.

The challenges of food system transformation in China have contextual uniqueness, but these experiences of deconstructing the systemic complexity and finding ways to connect consumers, communities, and government are nonetheless valuable. Emerging issues like food system transformation sometimes do not receive enough attention, especially when there is a more urgent and current issue, such as a pandemic or natural disaster. But when it comes to system change, we can always try starting small and thinking outside the box.

This article derives from research conducted for the China Healthy and Sustainable Diet Scoping Study, launched by The Food and Land Use Coalition, and scheduled to be published in 2022.