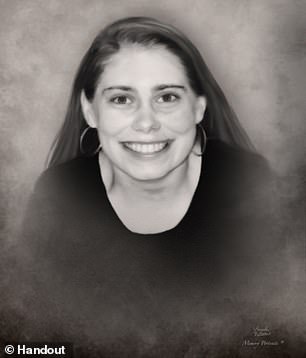 A high school photo of Lacey Ellen Fletcher, 36, taken when she was 16. The coroner believes she was left on the couch for 12 years

The parents of severely autistic Lacey Ellen Fletcher who died 'fused' to a sofa by her own excrement were arrested on Monday and face life in jail after a grand jury indicted them on second-degree murder charges.

DailyMail.com has obtained jail mugshots of Clay, 65, and Sheila, 64, taken shortly after they were picked up by sheriff's deputies and hauled off to East Feliciana Parish Jail in Clinton. Louisiana.

Sheriff Jeffery Travis told DailyMail.com: 'We picked them up, arrested them, brought them to the jail and we're in the process of booking them in.

'Their bond is not my purview. The judge sets the bond and she will work with their attorney for that. I'd say the bond will be really high.'

DailyMail.com understands that the couple’s bond is unlikely to be set for a few days.

That means under Louisiana state law that Sheila Fletcher is likely to be moved to a prison until at least the bond issue is sorted because there is a time limit that females can be held in jail. Her husband Clay will remain in the parish jail.

The first arraignment is expected to be in around two to three weeks.

In a horrific scene, Lacey's emaciated body was discovered partially naked, sitting upright and partly submerged in a hole in a couch covered from head to toe in urine, liquid feces, maggots and insect bites at her parents' otherwise neat single family home in Slaughter on January 3.

Her feet were crossed underneath her on the couch deep inside the hole that her long-suffering body had worn through both the upholstery and cushion. Dr Ewell Bickham III said she had been stuck on the couch for at least 12 years.

Additionally it has been reported that Lacey had fecal matter shoved on her face, chest and abdomen. Her hair was matted, knotted and filled with maggots – and she weighed less than 100lbs. 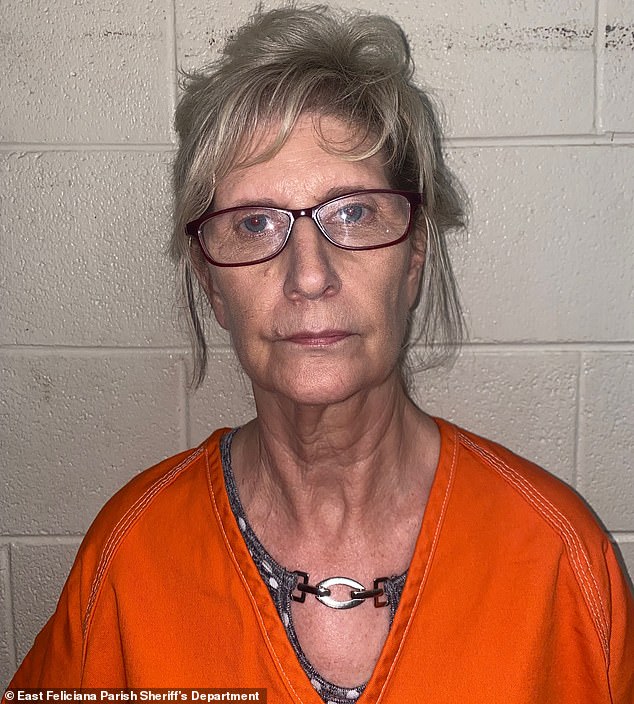 Sheila Fletcher, 64, (pictured) and Clay Fletcher, 65, did not attend the courthouse in Clinton, Louisiana, where District Attorney Sam D'Aquilla demanded the charge, which would mean mandatory life if convicted 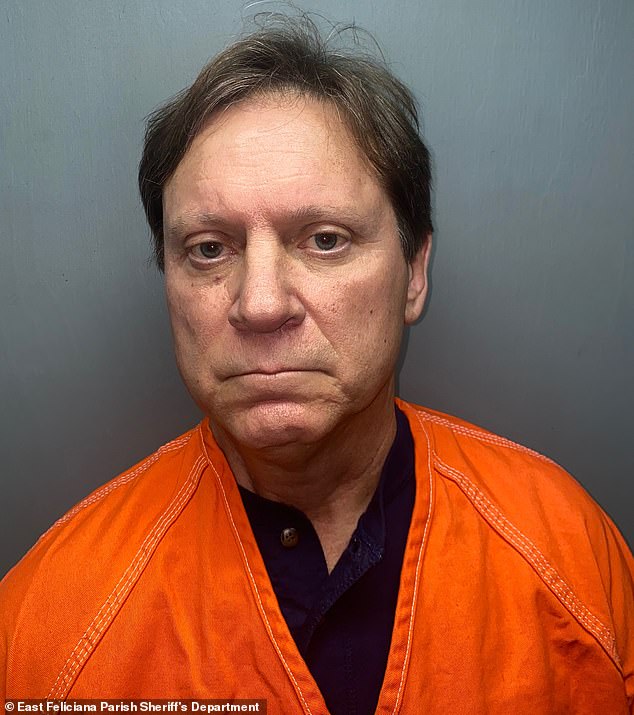 Clay Fletcher, 65, was arrested alongside his wife Sheila on Monday afternoon

Arrest warrants for the Fletchers were prepared immediately after the grand jury decision.

East Feliciana Parish Coroner Dr Ewell Bickham III told DailyMail.com Monday that the images of the conditions Lacey was found in were so horrific and upsetting that medics would be on standby for the members of the jury.

He added that the photos of the scene left those in the room speechless.

'When I was presenting the case and showed the pictures and gave the timeline the expressions of the grand jury was utter shock,' he said. 'Like the clock on the wall never moved again.'

'There was complete silence. Some jurors were gasping in horror. Some were staring in disbelief.'

Bickham also told the DailyMail.com that the case has been really hard on him personally and described Monday’s grand jury proceedings as ‘long emotional day.’

'Seeing those photos again and reliving this traumatic experience again was really hard.'

Outside the court, District Attorney D'Aquilla said: 'I believe justice was served here today. Lacey Fletcher didn't deserve the way she was treated.

'For this type of crime… second degree is the highest charge that could have been produced today.'

The Fletchers were arrested on Monday afternoon.

Dr Bickham revealed that Lacey had been on the couch for at least 12 years.

'Evidence wise, a minimum of 12 years,' he said. 'Could be before that. At least 12 years. A terribly long period of time.' 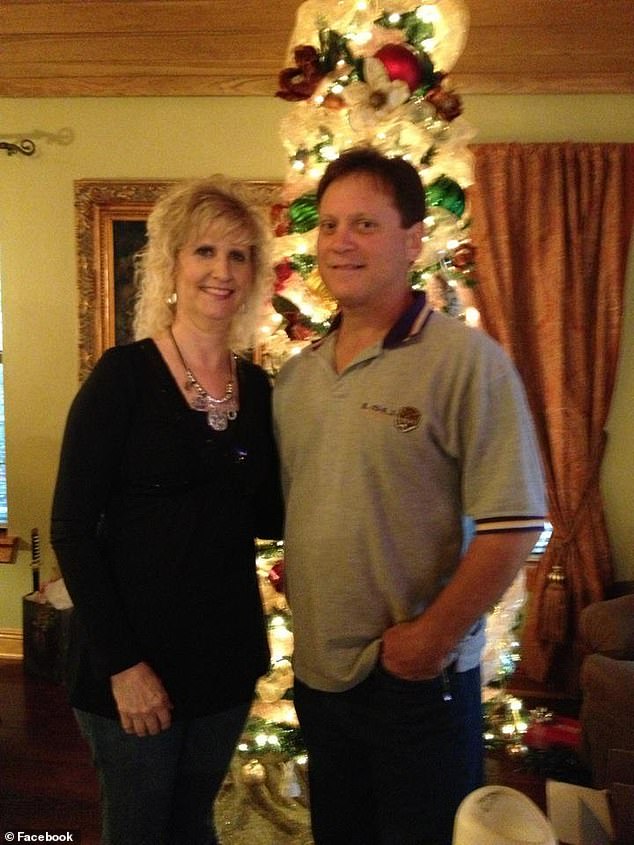 A grand jury was selected in Clinton on Monday – with East Feliciana District Attorney Sam D'Aquilla pressing them to charge the Clay Fletcher, 65, and Shiela Fletcher, 64, with second-degree murder for their daughter Lacey Ellen Fletcher's death. It would mean life sentences for the couple if convicted 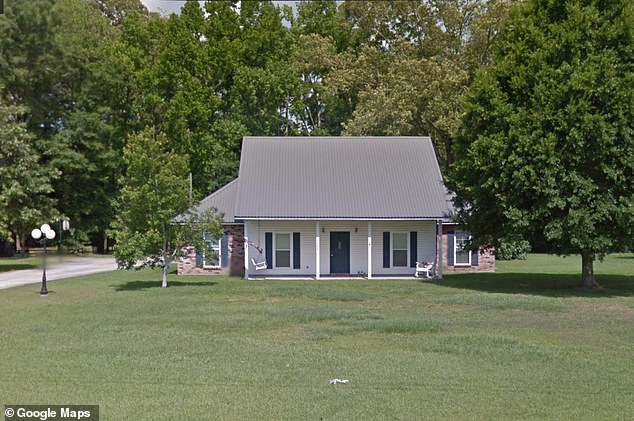 The coroner also revealed the full horrific cause of death.

He said: 'The cause of death stemmed from severe medical neglect, which led to chronic malnutrition, acute starvation, immobility, acute ulcer formation, osteomyelitis which is bone infection which led finally to sepsis.'

He said: 'I don't know where that term came from or what source it came from. In all my years as a practicing physician I have never heard of that term.

'The only diagnoses that I know she did have was first, social anxiety, severe autism and that's it. Those are her only two diagnoses.

DA D'Aquilla agreed Lacey's death was a 'crime against humanity' and added: 'I hope this indictment brings some spotlight to victims of this type of crime.

'The coroner has a lot of authority, a lot of power. If people don't want to get treatment or they refuse treatment, go to the coroner's office, go to law enforcement, check on your neighbors, check on your friends. If you are a care giver, reach out and make sure people are taken care of.

'This case was so horrific that the coroner and the sheriff's office initially investigated this case in January and the conditions that she was found it was just unbelievable.

'You don't treat anybody of any animals like that. Something had to be done and we all got together, we all stood on the same platform and we are all here now and we have an indictment for second degree murder.'

Sheriff Travis added: 'It was nothing short of horrific and sickening. We all collectively worked together to reach the point that we are at now. This is a case that is rare, but today everything was done correctly by every member of this team and we successfully reached a conviction(sic) that we believe is going to being justice for Lacey's situation. 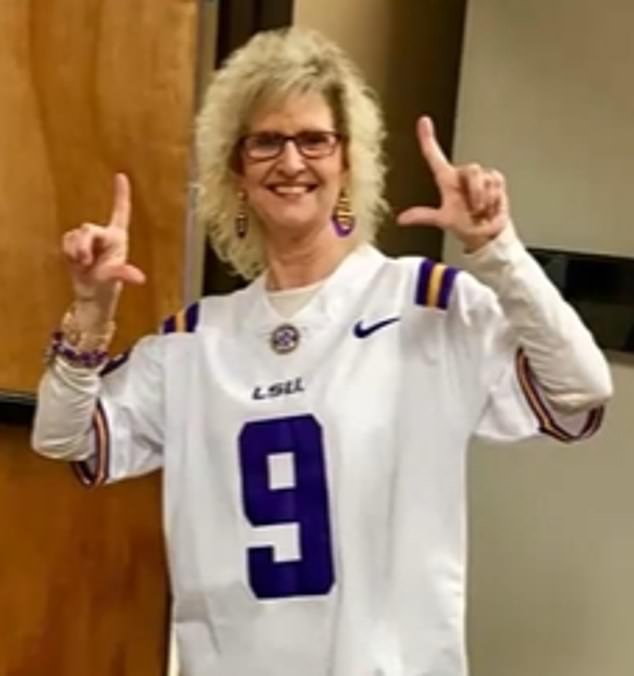 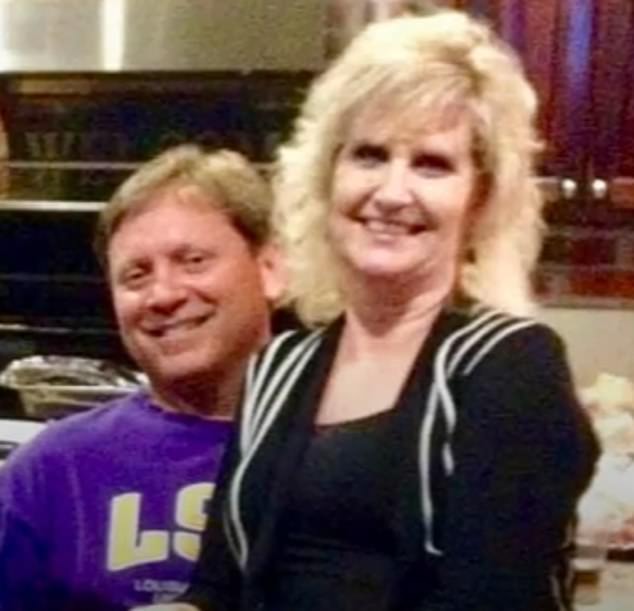 Clay Fletcher, shown with Sheila in undated photo, is an officer of the nonprofit Baton Rouge Civil War Roundtable, which has a mission 'to educate and foster an appreciation for the sacrifices made by all during the Civil War' 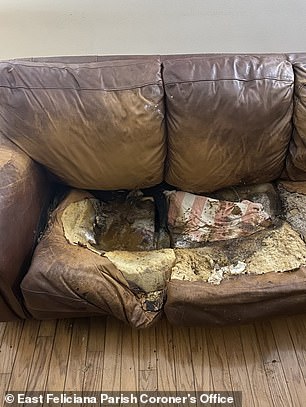 A photo showing a close-up of the leather couch Lacey was fused to. The coroner estimates that Lacey was sitting in that hole in the couch for the last 12 years

The Fletchers, considered outwardly respectable and pillars of their community, were not at the courthouse and have not been seen since news broke last week of the horror. They were not immediately arrested because they were not considered flight risks.

DailyMail.com understands Sheila Fletcher rang 911 at 2am on January 3 to report her daughter had stopped breathing. The sheriff's office sent a deputy to the ranch-style home 20 miles north of Baton Rouge.

But after confronting the horror, the deputy reported back and East Feliciana Parish Coroner Dr Ewell Dewitt Bickham III immediately came out.

He said: 'The scene was sickening. I've seen some horrible things in my life but nothing like this.' He said bedsores went all the way down to her bone.

Horrific photos issued by Dr Bickham's office revealed the feces smeared hole in the sofa where Bickham believes Lacey might have been sitting for the past 12 years.

The Fletchers were meant to be her caregivers. 'It's unconscionable, something you make horror movies about,' said Bickham.

The moment he arrived at the home he was hit by a stench so bad 'it would almost make you run out of the house.' He said he knew immediately it was a potential crime scene.

'The parents were in the kitchen. They did not have an explanation,' he said. 'I couldn't eat for a week and I cried for a week.'

He ruled her death a homicide with the cause as medical neglect – believing she passed 24 to 48 hours before his official time of death of 3.07am, January 3.

The tragedy is even more of a mystery as Sheila Fletcher worked for authorities who might have helped her daughter.

She was a police and court clerk in the small nearby city of Baker and more recently an assistant to the city prosecutor in Zachary, a slighter larger community also nearby.

The mom was also on Slaughter's Board of Alderman but quit on January 24 following four years' service and three weeks after the horror discovery.

Clay Fletcher is an officer of non-profit Baton Rouge Civil War Roundtable, which has a mission 'to educate and foster an appreciation for the sacrifices made by all during the Civil War'.

The couple's lawyer Steven Moore has said in a statement: 'They don't want to relive the pain of losing a child through the media.

'They have been through a lot of heartache over the years. Anyone who had lost a child knows what it's like.'

Before the grand jury hearing, the coroner said he would present the case with the hope of the parents being charged over the death. 'I probably won't even have to open my mouth, the pictures will show it,' he said.

District Attorney D'Aquilla has said: 'On a murder, you have to have intent. Did they want to kill her? I want to say yeah, they wanted to kill her.'

'Negligent homicide is zero to five years, manslaughter is zero to 40 years and second-degree is life in prison. I will ask for second degree because they didn't do what they were supposed to do.

'We don't treat animals or neglect animals in that way. If you have an animal in that condition you have to take them to a vet.

'If you are not capable of providing the care then get help. We want people to know that if you are a caregiver of someone you need to pay attention. It is important for neighbors and the community to look out for each other. We hope this never happens again.'

He said the Fletchers claimed in 2011-2012 that Lacey didn't want to leave the house and had not been to a doctor. He said the parents claimed she was able to communicate with them and apparently never complained.

D'Aquilla added it was not known when Lacey had last moved from the couch.

The Fletchers reportedly said Lacey developed 'some degree of Asperger's syndrome' after 9th grade when she started being home schooled.

They insisted during an interview with law enforcement that she was the one who chose never to leave the couch and to relieve herself there or on a nearby towel, it is reported. Sheila Fletcher said she routinely cleaned her daughter's sores.

News of the January horror is breaking now as the autopsy report was not handed to East Feliciana Sheriff's Office until March. At that point Sheriff Travis consulted with District Attorney D'Aquilla on a course of action that has resulted in this grand jury deliberation.

A new East Feliciana Parish grand jury is selected every six months, with a new one chosen today. Authorities decided it should be the new jury that decided the Fletcher case.